Don’t ask how I came across this, it was a coincidance.

You think you seen UFOs?

They showed up in the wrong century. An account from 1561, introduced to modernity by Carl Jung in his UFO book.

"In the morning of April 14, 1561, at daybreak, between 4 and 5 a.m., a dreadful apparition occurred on the sun, and then this was seen in Nuremberg in the city, before the gates and in the country – by many men and women. At first there appeared in the middle of the sun two blood-red semi-circular arcs, just like the moon in its last quarter. And in the sun, above and below and on both sides, the color was blood, there stood a round ball of partly dull, partly black ferrous color. Likewise there stood on both sides and as a torus about the sun such blood-red ones and other balls in large number, about three in a line and four in a square, also some alone. In between these globes there were visible a few blood-red crosses, between which there were blood-red strips, becoming thicker to the rear and in the front malleable like the rods of reed-grass, which were intermingled, among them two big rods, one on the right, the other to the left, and within the small and big rods there were three, also four and more globes. These all started to fight among themselves, so that the globes, which were first in the sun, flew out to the ones standing on both sides, thereafter, the globes standing outside the sun, in the small and large rods, flew into the sun. Besides the globes flew back and forth among themselves and fought vehemently with each other for over an hour. And when the conflict in and again out of the sun was most intense, they became fatigued to such an extent that they all, as said above, fell from the sun down upon the earth 'as if they all burned' and they then wasted away on the earth with immense smoke. After all this there was something like a black spear, very long and thick, sighted; the shaft pointed to the east, the point pointed west. Whatever such signs mean, God alone knows. Although we have seen, shortly one after another, many kinds of signs on the heaven, which are sent to us by the almighty God, to bring us to repentance, we still are, unfortunately, so ungrateful that we despise such high signs and miracles of God. Or we speak of them with ridicule and discard them to the wind, in order that God may send us a frightening punishment on account of our ungratefulness. After all, the God-fearing will by no means discard these signs, but will take it to heart as a warning of their merciful Father in heaven, will mend their lives and faithfully beg God, that He may avert His wrath, including the well-deserved punishment, on us, so that we may temporarily here and perpetually there, live as his children. For it, may God grant us his help, Amen. By Hanns Glaser, letter-painter of Nurnberg."

Interesting to read an account of a pre-technology person.

I’m captivated by this. 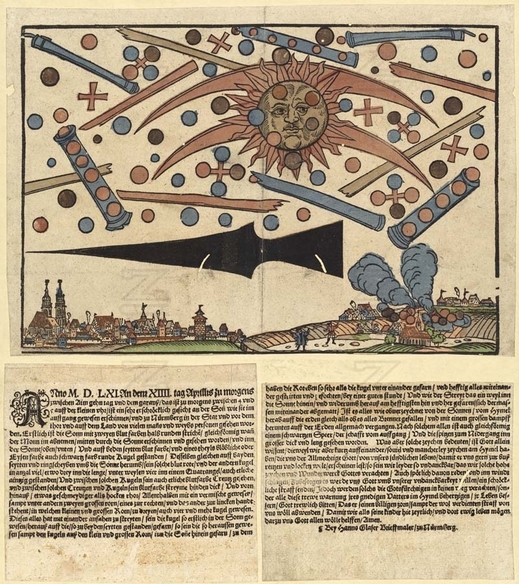 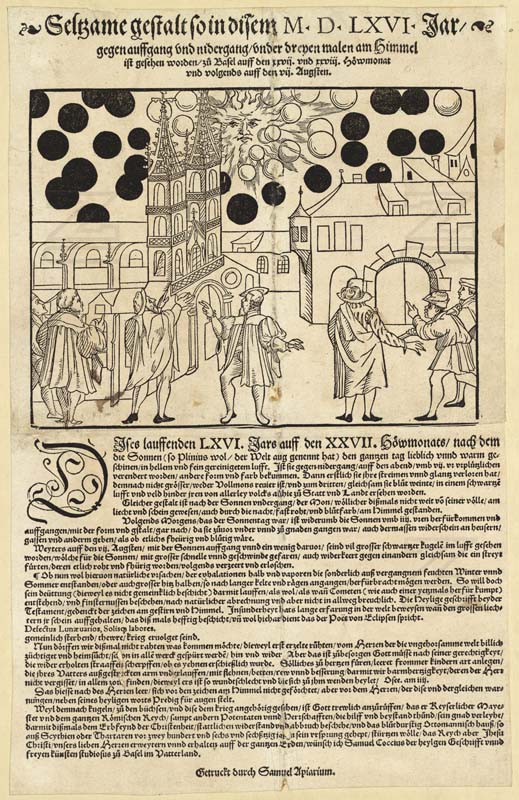 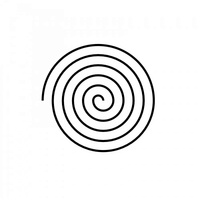 The other day I took a walk and I stopped for a bit and found myself staring off into space thinking about a fish or something. Something caught my eye in a thick bunch of vines with orange pink flowers.

I saw a leaf move strangely I thought, must be a stick bug. I thought I saw a small arm. I didn’t move, my breathing slowed down as if someone poured honey in my mouth.

I began to feel quite thirsty. I saw the leaf move weirdly again, but this time I saw a small hand holding a golden thimble slowly reaching out of a thick thicket of flowers. All my hairs stood at attention and the air felt electric blue and had a golden odor. My god I gasped, it was a a faery girl almost as if she leaped off a page.

As I was quite thirsty, and feeling like I could trust this little faery, I thought, why not. Now I see I was bedazzled, which isn’t quite fair now is it. I had no inhibitions at all in that golden blue light. I took the thimble and said thank you, and then sniffed the golden thimble. It had the strangest earthy smell that hung in your senses. The thimble was warm and seemed to actually be glowing.

So I drank the little thimble down and almost immediately my body was electrified and I felt waves of electricity crackling over my skin, little golden sparks were popping all around me. I immediately fell backwards stiff as a statue.

I felt frozen. No thoughts. Eyes staring into nothing. Then I saw a little face peer up from around my ear and I heard, I’m sorry I had to do that to you. But you never know what kind of human you may meet. That seemed practical to me. She said I would soon be able to move, but she wanted to have a little chat first. This seemed reasonable to me at the time.

At this point, looking back, it all seems like a dream. I remember waking up alone. Very groggy. With a taste in my mouth like I had eaten moss. I’m not sure what we spoke about. I just can’t remember. I do remember her face very clearly. I also felt totally refreshed and had energy pulsing to get up and get back to the car. I’m sure it was all a dream now.

Be careful who you take a drink from. Especially if they offer you a golden glowing thimble.
AtomicBrando

When you write a faery tale, you are telling a real story.

It seems to attract funny things.

To attempt to write down in English what the secret fire is, which is related to the Golden Chain, ends in Gibberish. Named after an alchemist who attempted such, Geber.

It subverts all attempts to express it. Any book about it becomes part of the Golden Chain.

I have discovered I cannot get around Plato.

He challenges my existential ways.

The path to lucidity has now veered into the Hermetic labyrinth.

You must use whatever found like a prism held to the light of the secret fire.

The secret is a way of seeing the West has forgotten.

But all things that go around, come around.

Watch your thoughts and feelings as witness, suspending judgment.

When the ego is about to be unmasked, it shapeshifts into the self.

Seeking after realization is just like looking for a candy bar or a bag of chips.

Wanting to be better is why we aren’t.

Woke culture is not realization.

It doesn’t call you to pay the price of love, it sells the lie.

The only way to handle danger is to face it.

There is no poor little me left.

I have brought something back from the Underworld, to the big tent.

I have come back, I carry the fire into everyday life now.

I was asked what I love.

I stopped lying to people about who I am, I am this.

Wherever is self, is other.

You always have a crest and a trough together.

That is the secret, look into that maybe.

And I’d like to give a general thanks to Cy and team.

All respect to the Tuatha de Danann and letting me dance around in your backyard. They like to dance

They are from before the making of the Earth.

Nice neighbors to have if they don’t sap your life away.

This is one strange life, lights in the sky are nuthin.

Philosophy today has lost its way looking for the meaning of meaning.

The Philosopher does not have wisdom, they have a love of wisdom.

From there you may consider before acting.
U

U
Member of Distinction

Just give me the damn chips.
smelly da goat

I know for a fact Plato tripped ballz.

I just can’t prove it to you.

It’s sad for a human to die and not know the psychedelic/ecstatic/green states of mind.

I highly encourage you to continue your decent you began being born.

There is something down there.

Something terrible and awesome.

And now the Daimon calls

It has shown itself

I have risen to meet it

But I do not know who meets whom

We swirl around one another

It takes animal forms and touches my emotions

I feel genuine thanks

But I do not know what to thank

I asked it to show me clearly

How to better speak within

After the trials and fear lost

But I do not know who to thank

I shall thank my Self

For surely something awesome is at hand

The mind is gate and gap

And forever shall remain free and clear
smelly da goat

Where shall you seek beauty, and how shall you find her unless she herself be your way and your guide?

And how shall you speak of her except she be the weaver of your speech?

The aggrieved and the injured say, “Beauty is kind and gentle. Like a young mother half-shy of her own glory she walks among us."

And the passionate say, "Nay, beauty is a thing of might and dread. Like the tempest she shakes the earth beneath us and the sky above us."

The tired and the weary say,

“Beauty is of soft whisperings. She speaks in our spirit.

Her voice yields to our silences like a faint light that quivers in fear of the shadow."

But the restless say,

“We have heard her shouting among the mountains, And with her cries came the sound of hoofs, and the beating of wings and the roaring of lions."

At night the watchmen of the city say, "Beauty shall rise with the dawn from the east."

And at noontide the toilers and the wayfarers say,

"We have seen her leaning over the earth from the windows of the sunset."

In winter say the snow-bound, "She shall come with the spring leaping upon the hills."

And in the summer heat the reapers say,

"We have seen her dancing with the autumn leaves,
and we saw a drift of snow in her hair."

All these things have you said of beauty,

Yet in truth you spoke not of her but of needs unsatisfied,

And beauty is not a need but an ecstasy.

It is not a mouth thirsting nor an empty hand stretched forth,

But rather a heart enflamed and a soul enchanted.

It is not the image you would see nor the song you would hear,

But rather an image you see though you close your eyes and a song you hear though you shut your ears.

It is not the sap within the furrowed bark, nor a wing attached to a claw,

People of Orphalese, beauty is life when life unveils her holy face.

But you are life and you are the veil.

Beauty is eternity gazing at itself in a mirror.

But you are eternity and you are the mirror.
dan

Khalil comes on here as an ardent personalist.

He has far more fortitude than you, smelly. It requires intestinal fortitude to stand up for personhood, in this dark and benighted age.
smelly da goat

I’m sure many are better at living than I am.
Sponsored content